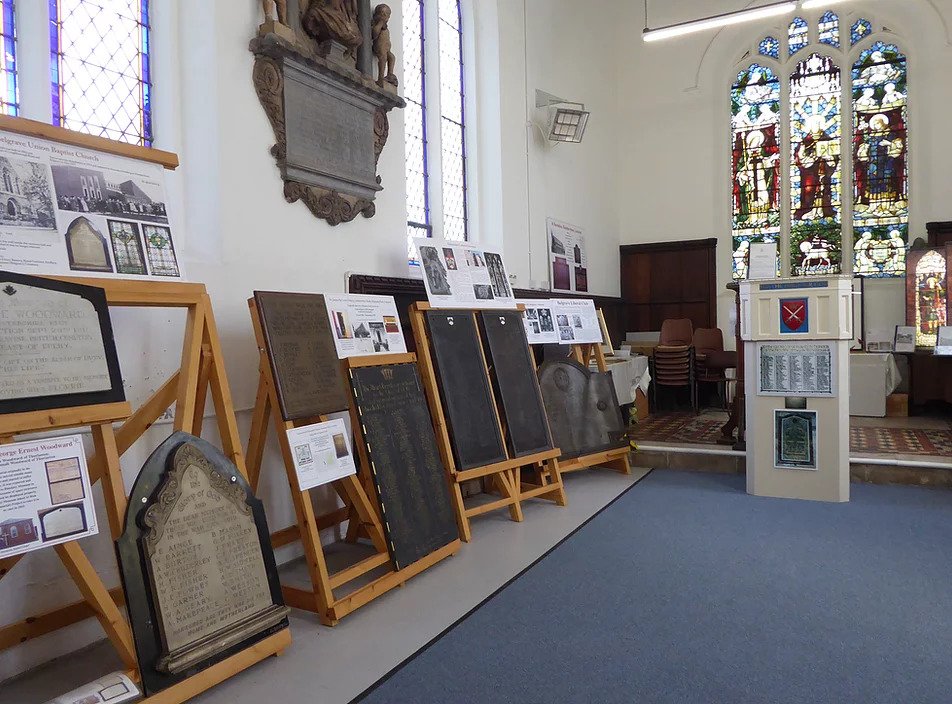 The Project's primary aims and objectives can be summarised as follows:

Although we became established as a formal organisation in August 2012, the Project’s work goes back many years before this.

Our co-founders (Denis Kenyon and Chris Stephens) have been actively involved in the preservation of war memorials in the counties of Leicester and Rutland for some time. Both are long-standing regional volunteers for the War Memorials Trust which is an organisation dedicated to the protection and conservation of war memorials throughout the whole of the UK. Denis was also a volunteer for the UK National Inventory of War Memorials which is now part of the Imperial War Museum.

It was Denis and Chris’s involvement with the memorials at St. Saviour’s Church in Leicester which acted as the trigger for them to consider the setting up of an organisation with the capability of taking direct action to either preserve or rescue memorials that were at risk of being lost through theft or vandalism. St. Saviour’s Church in particular possessed three fine examples of stained glass window memorials together with many other items of remembrance.​

Despite their best endeavours, the memorials could not be preserved intact and their fears were realised when the church was subsequently comprehensively vandalised and nearly all the memorials stolen. Fortunately, thanks to Denis and Chris’s foresight, all of the memorials had been permanently recorded on film which allowed the three windows to be faithfully reproduced in the form of light boxes (see right) which now take pride of place among our resident memorials.

Through Chris’s involvement with various churches it soon became clear that St. Saviours Church was not an isolated case and there was much work to be done with similarly affected memorials not only in churches and chapels but also in offices, schools and factories.

Throughout 2010 and 2011, Denis and Chris attended various events to promote the plight of many memorials and the work they intended to do in order to preserve them. This culminated in a presentation made in June 2011 (in conjunction with the Leicestershire War Memorials Project) at a gathering of many senior local authority officials and armed forces representatives.

Following the support voiced at that presentation it was clear that their work needed a formal structure, funding and a place to house the rescued or “orphaned” memorials as they came to be known.​

Throughout 2012, the application process was commenced for funding from the Heritage Lottery Fund (HLF) and through Chris’s contacts with the Churches Conservation Trust a location to house the orphaned memorials (some of which had already been recovered) was sourced at the sadly now defunct church at All Saints’ on Highcross in Leicester. In August 2012, the Project was formally incorporated at Companies House as a dedicated and distinct legal organisation.

During the same period, a committed team of volunteers was established to help promote the Project and assist with its operations. A patron (John Florance) was appointed and in April 2013 the Project’s application for funding from the HLF was successful.

Since that time, we have become a more established organisation and have steadily taken on new projects and become involved with some locally high-profile memorials such as those at St. Luke’s Chapel at the Leicester Royal Infirmary.

We have set up this web site to allow greater access to our work: we also have many open days throughout the year and attend various local history events to raise awareness of the work we do.

There is a Latin inscription on one of the memorial tablets dedicated to those from Alderman Newton’s school who lost their lives in WW1 and WW2. The inscription reads “non sibi sed posteris”. This translates to “not for ourselves but for those who follow”. All of us here on the Project hope you will join us in adopting and embracing this motto for the future generations.

Interview with Denis Kenyon where he explains more about our project.

Here you can find more about the people who are connected with the Project. In addition to those listed below, we are also assisted by several other people who give up their time and provide us with access to a whole host of resources and information in relation to the work that we do. As everyone works on a voluntary basis, those behind the Project are exceptionally grateful for their commitment in ensuring the Project meets its objectives.

Denis, with Chris Stephens (see below), is the Project’s co-founder and is also one of the two Directors and Members of the ‘umbrella’ limited company.

Denis has long been interested in military matters.  However, it was only after retiring from business, when he joined the War Memorials Trust (WMT) as a regional volunteer and also became a recorder for the National Inventory of War Memorials, that his interest became focussed on this particular aspect of military history.

He was horrified at the risk posed to memorials in St Saviour’s Church, Leicester in particular. A concern that was very well justified when the building was comprehensively vandalised and nearly all the memorials stolen.  Fortunately, thanks to Denis and Chris’s foresight, all of the memorials had been permanently recorded on film.

With his WMT colleague Chris Stephens, who had for many years been active in keeping an eye on the problem and where possible dealing with it, they were resolved to do something structured about this threat and came up with the idea of a “sanctuary” for memorials at risk.

After many hours of discussion with personnel from Heritage Lottery Fund and Churches Conservation Trust, the Project was formally born, funds were granted, a base was found at All Saint’s Church, Highcross Street, Leicester and a team of willing volunteer experts was gathered together.  The Project was on the road!

Chris, with Denis Kenyon (see above), is the Project’s co-founder and is also one of the two Directors and Members of the ‘umbrella’ limited company. Chris has an almost encyclopaedic knowledge of Leicester’s religious, social and industrial past and is the Project’s key point of contact where religious buildings are concerned. Chris oversees the Project’s tenure at All Saint’s Church and he has many local connections.

A former RSPCA inspector, in 2002 Chris was awarded an MBE for services to that organisation.

David and Valerie are avid and experienced researchers with a shared particular interest in World War One. Being fluent and extremely capable writers, David and Valerie assist the Project with its marketing material, content and design for leaflets and pamphlets etc. and are always on hand to share their invaluable knowledge and expertise. David and Valerie are the Chairman and Secretary respectively of the Leicestershire and Rutland Branch of the Western Front Association and run a successful annual Armistice Tour to Ypres each November.

Simon is a new member who joined after finding out about the organisation from Denis Kenyon. He is also Secretary of the East Midlands War Memorials Association, a new organisation that promotes the message of remembrance in the East Midlands through education. He has a keen interest in history, including local history, and is keen to ensure we continue to remember the sacrifices of those who have fought for our freedom.​

Simon currently works as a Press Officer for a Member of the European Parliament for the East Midlands.

Jackie helps with the Project’s social media and runs the Facebook page. She is also Secretary of the Friends of Welford Road Cemetery.

Roy also plays a vital part of the team.