The Leicestershire Regiment in the Great War,

The mobilisation telegrams which were despatched from the War Office from 4.40 pm on 4th August 1914, were delivered to depots, headquarters and military stations throughout the United Kingdom. Further messages alerted troops at every station in the Empire that they were now at war.

For the Leicestershire Regiment this meant a telegram to the barracks at Fermoy, where the regular 1st Battalion immediately began to prepare for the arrival of nearly six hundred reservists, armed and equipped by the Depot at Glen Parva and shipped across the Irish sea to bring it up to strength. By 19 August the battalion had joined the 6th Division near Cambridge where it awaited its transfer to the British Expeditionary Force (B.E.F.).

More telegrams mobilised the two Territorial battalions, the 4th raised in Leicester and its suburbs and the 5th from Leicestershire and Rutland, which gathered respectively at the Magazine in Leicester and in Loughborough. A host of Special Reservists, older and less fit for active service, formed companies to guard German prisoners at Donington Park and railway viaducts throughout the region.

The 2nd Leicesters, the ‘Tigers’’ other regular battalion, stationed at Ranikhet in India, remained on a peacetime footing until their mobilisation telegram arrived on 9 August. Even then it was not until 15 September 1914 that they, as part of the Garwhal Brigade of the Meerut Division, embarked at Karachi to join the war in Europe.

Having remained at home to forestall a feared German invasion of the east coast, the 1st Leicesters did not reach the B.E.F. until 21 September; arriving in time to experience fierce fighting along the River Aisne and the beginning of the trench warfare which was to characterise the Western Front until late in 1918. In October the battalion, with the B.E.F. was moved further north, eventually holding the Allied line around Ypres in Belgium. 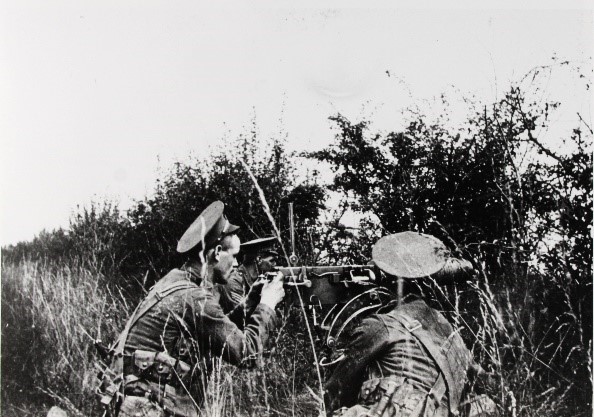 Fierce attacks from the Germans were fought off, one ‘Tiger’, wounded near Armentieres, telling a local reporter that the 1st Battalion’s “shooting has been extraordinarily good, especially considering the rapidity with which firing took place. Once or twice the Germans have attacked en masse, and the first volley from the Leicesters has wiped away the first line as if they were leaves blown down by the wind…” 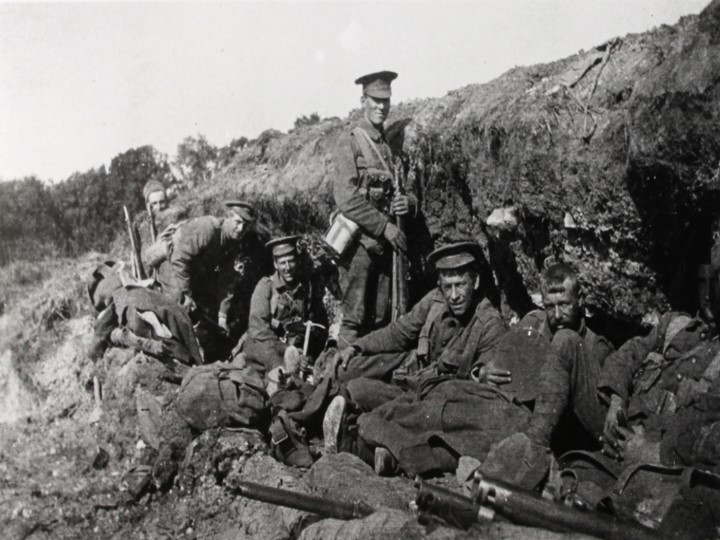 The first trenches: men of ‘B’ Company, 1st Leicesters, dig in near Vailly-sur-Aisne, September 1914.

The 2nd Battalion, spearheading what was eventually to become a full Indian Army Corps, reached Marseilles on 12 October and was in the trenches north of La Bassée by 28 October 1914.

It is often said that the old, professional British Army perished over the winter of 1914-15, holding the wet, freezing trenches of the Ypres salient and French Flanders. Certainly, casualties were heavy as wave after wave of Germans crashed against the inadequate defences and more and more soldiers fell ill from living in damp and crumbling trenches. The Indian Corps perhaps suffered more than most, being used to warmer climes, but the 2nd Leicesters, led by Colonel Blackader, nevertheless made a name for themselves, carrying out aggressive trench raids which brought back valuable intelligence and, on one occasion, two German machine guns (which may still be seen at the Regimental Museum). 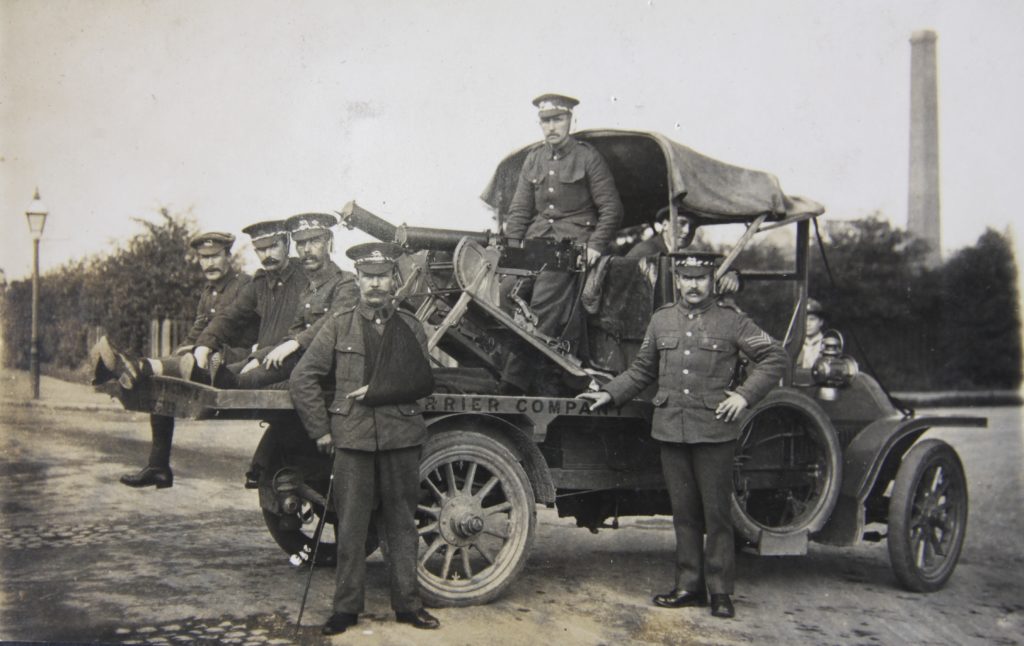 A recruiting party from the 2nd battalion, with their captured machine-guns, 1915.

Despite a winter of heavy losses, 1915 brought new hope to the British and their allies. The French and Belgians were eager to recover territory under German occupation and to relieve pressure on their Russian allies. So, as reinforcements arrived for the BEF from the Empire and from Territorial units at home, plans were laid for the first British offensive of the war, south-west of Armentieres – where the German trenches bulged around the village of Neuve Chapelle.

For the first time, British forces had a numerical superiority. The plan was to bring overwhelming artillery fire and numbers of troops to bear on a section of the enemy line already weakened by transfers to the East. With luck, converging forces would snuff out the German salient at Neuve Chapelle. Reserves would then advance through Biez Wood to seize the Aubers Ridge – from where British guns could dominate the landscape as far as Lille.

At 8.05 on 10 March, following a brief, devastating artillery barrage, General C. G. Blackader’s Garwhal Brigade (including his old battalion, the 2nd Leicesters) swept from their trenches alongside the Port Arthur strongpoint, towards the ruins of Neuve Chapelle. Two more British brigades attacked in a pincer from the north. Despite heavy fire from a few isolated strongpoints and machine guns on their flanks, the British and Indians were soon amongst the German defences – bombing and bayoneting their way along the trenches and from house to house.

Although many of the German defenders were dazed by the furious bombardment and surrendered, others fought on stubbornly. Lieutenant N. Tennant, of 11th Howitzer Battery, Royal Artillery, watched the attack:

“Presently across the field came trudging a cocky little Tommy of the Leicestershires with fixed bayonet following a dozen young German prisoners. He was munching a ration biscuit and he was yellow with lyddite fumes”

It was here that William Buckingham, of the Leicesters, earned his Victoria Cross, repeatedly risking his life to bring in wounded men. Sergeant H E Ruckledge, Corporal R Keitley and Privates C Oakes and J Steeples also received the Distinguished Conduct Medal for their gallantry in helping wounded comrades. Private G Hill also won the DCM for his courage in continually carrying messages across the bullet-swept no-man’s land.

“one platoon…under Captain Romilly, succeeded in bombing the enemy back down the trench…here a barricade was built, and was held…until the Seaforth Highlanders…took over the line.”