The capture of Bazentin Wood proved a military triumph but came at a terrible price. The four Leicestershire battalions between them, suffered nearly 2,000 casualties; the costliest ever day for the Regiment. Private I. L. ‘Dick’ Read, was a Lewis Gunner, with ‘C’ Company, 8th Battalion, and one of the Regiment’s foremost chroniclers: “We watched a fatigue party bringing up our rations, dumping piles of bulging sandbags on the ground near us, and this set us running through the names of our mates we knew already to be killed, wounded or missing…Eventually Jackie [Read’s chum, Private ‘Jack’ Johnson] broke the silence. ‘Plenty of rations tonight, Dick!’ nodding towards the pile. ‘Enough for the whole battalion, eh? About six times too many.’ He added bitterly, ‘Christ, there’ll be hell to pay in Leicester and Loughborough…and Coalville…and Melton…and Uppingham…when they know about this. The Leicester Brigade, eh? Bloody well wiped out!’ And he trailed off into silence again, immersed in his thoughts.”

The regulars of the 1st Battalion had been held in reserve at first, helping to bury the dead of the first attacks that July. Now they moved into the front-line to prepare for a fresh assault on the Morval Ridge, dominated by the villages of Morval itself, Gueudecourt and the mysterious Sydow Höhe Redoubt (known to the British as ‘the Quadrilateral’).

The attack began on 15 September 1916; the 1st Leicesters advancing straight into the barbed wire and machine-gun nests of the Quadrilateral. The battalion war diary records what happened: “Throughout the advance the Battalion suffered very heavily from Machine gun fire. The Battalion had not gained its objective being held up by very heavy fire and very strong and undamaged wire net in front of the trench leading from the North West corner of the Quadrilateral (a strong point hitherto unknown).”

This matter of fact account conceals a loss to the Leicesters of 14 out of 21 officers and 410 out of 643 Other Ranks, including Private William Buckingham, who had been awarded the V.C. for gallantry at Neuve Chapelle the year before.

Part of the problem was that British artillery had not comprehensively bombarded the area. Wide routes (unluckily including most of the largely undetected Quadrilateral) had been left untouched by the shelling to give a clear passage for a new and secret weapon…the tank!

Despite their initial impact on the enemy, the tanks were not, at first, an unmixed blessing. On 15 September, of six tanks committed to support the attack, four broke down before reaching the front-line. Of the two remaining, one was disabled (possibly by a British shell fired short). The other, ‘C22’ commanded by Lieutenant Henriques, seems to have opened fire on troops of the Norfolk Regiment, alerting the Germans to the impending attack and bringing down upon them an artillery bombardment, before trundling across to the Quadrilateral, where it fired on the enemy and received in return armour piercing bullets.

It was, however, the first ever tank action and, despite their shaky start, Private George Cluley, of the Leicestershire Regiment, was impressed:

“To an onlooker at a safe distance the tank is an amusing spectacle, slouching along like some new kind of animal, apparently impervious to shells and bullets alike. He has a weakness for machine gun emplacements whose occupants are bothering our ‘Boys’ who are advancing across the open. He creeps slowly and deliberately up to the machine gun emplacements ignoring the ping-ping of the bullets on his steel skin – and if the gun is still in action when he arrives there he clambers slowly and laboriously on to the shell-proof roof. His terrible weight flattens the emplacement like an egg-shell…”

Sadly, with too few tanks and too many ‘avenues’ for them left by the artillery, the attack on 15 September 1916 was another costly failure. Amongst the British army’s 30,000 casualties that day was the Prime Minister’s son, Raymond Asquith. Sergeant Ofield, of the Leicesters, witnessed the withdrawal:

“We saw our Guards come out of action, and saw men of one of our battalions also, and noticed them carrying out the body of Mr. Asquith’s son…”

Lieutenant Asquith’s grave is in the Guillemont Road Cemetery. Nearby is his comrade and relative by marriage, Lieutenant The Honourable Edward Wyndham Tennant, eldest son of Lord Glenconner; who, in a striking reminder of the democracy of death, lies for eternity beside Private Cyril Dobson, a South Wigston teenager and elastic web packer, who died with the 11th Battalion The Leicestershire Regiment (the Midland Pioneers). 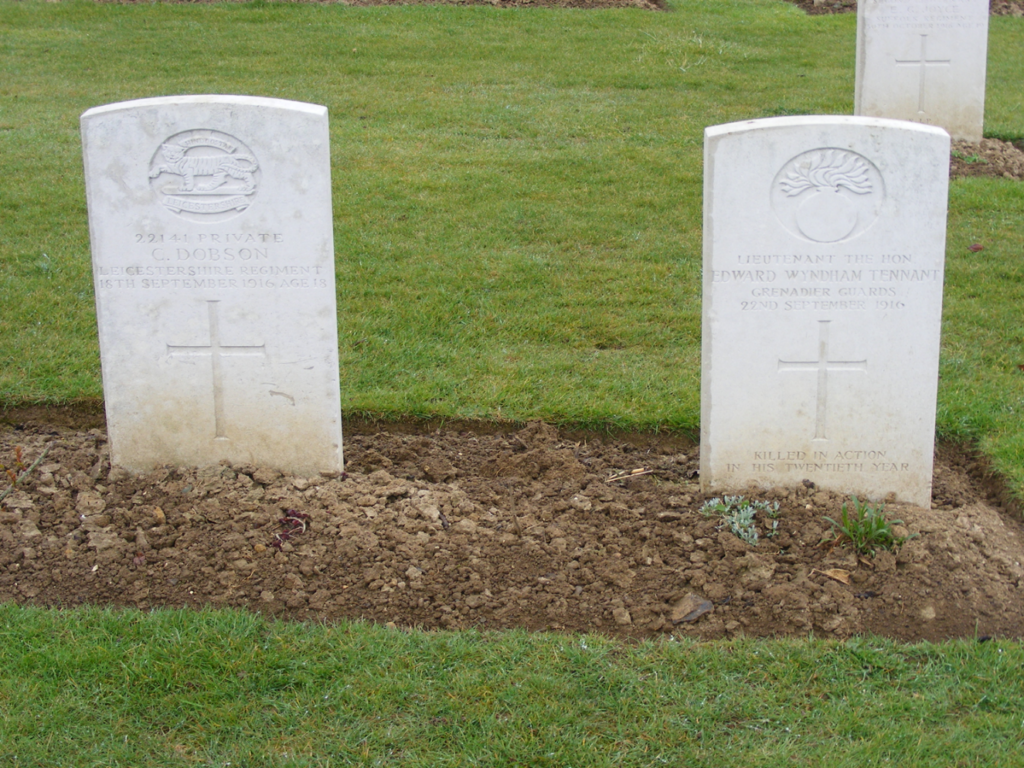 The graves of Dobson and Tennant

On 25 September a new offensive, with heavier artillery support and more tanks, broke through to capture the Quadrilateral and pierce the German third defence line by seizing the village of Morval itself. The Service battalions of the Tigers, rested after their ordeal in Bazentin Wood, finally took the heavily fortified hill-top village of Gueudecourt. Despite initially stalling in the face of heavy machine-gun fire, in a striking demonstration of modern warfare, victory seems to have come from a combination of aerial attack, tanks and well-managed hand-grenade work.

The War Diary of the 8th Leicesters records the attack in almost lyrical terms, which contrasts greatly with the laconicism of the 1st Battalion’s ten days before. We can only guess at the horror which lies behind the words of Lieutenant and adjutant J.W. Dixon Smith: “The attack was launched with splendid heroism, the first objective was gained in about three quarters of an hour. The men then stopped a short time to consolidate their gain, and to allow the artillery barrage to lift. They then pressed on to their second objective…the village of Gueudecourt. By the time they reached the village their ranks were sadly thinned, by the tremendous artillery barrage the enemy put up, and by machine guns which wrought terrible havoc…with dauntless gallantry they pressed on, reaching the village and engaging the enemy in hand-to-hand fighting, which took place all the night…”

The British now began to work their way north along the Thiepval Ridge, seizing the Schwaben Redoubt and the village of Beaumont Hamel. It was now mid-November and the campaign finally floundered to a halt, in the rain and mud of winter. On 24 February 1917, in a display of the pragmatism which made them so formidable in defence, despite having fought viciously and determinedly throughout the Autumn and Winter to preserve every inch of ground, the Germans suddenly abandoned their front line and withdrew, in some cases many miles, to a vastly strong new defensive line known as the Siegfriedstellung or (to the British) Hindenburg Line.

The ‘Big Push’ on the Somme was over. The British and French had advanced approximately six miles on a front of perhaps sixteen. The effort had cost over 620,000 casualties, with another 460,000 Germans killed and wounded in trying to stop them. Valuable lessons had been learned, mostly the hard way, and the British army had certainly received and delivered some of the harshest blows in its history. It was not a single battle but a campaign; a series of titanic struggles for villages and features of the landscape, whose names survive now as Battle Honours and in the carved cartouches on the pillars of the Thiepval Memorial.

Only one of the Tigers’ active service battalions was absent from the Somme. In October 1915, the Indian Corps had been withdrawn from the Western Front and despatched to join a growing army in Egypt, preparing for a major offensive against the Turks in Mesopotamia. As part of the new Tigris Corps, the 2nd Leicesters were to relieve British forces trapped at Kut-el-Amara and to push on to destroy Ottoman power in the Middle East.

Despite high hopes, the campaign was a failure. The Turks proved every bit as tenacious in defence as the Germans and both the climate and geography to be just as hostile. Extreme heat, interspersed with torrential rain and floods, made any movement a trial and the need to cling to the river Tigris, for water and transport, prevented any imaginative strategy. By the time of the Gommecourt and Somme attacks, troops were being evacuated, sick, from Mesopotamia at the rate of a thousand a day. 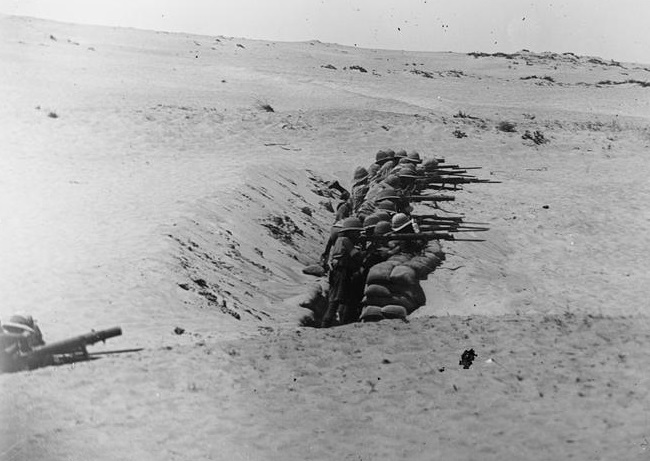 THE BRITISH ARMY IN THE SINAI AND PALESTINE CAMPAIGN, 1915-1918 (Q 12507) The Leicestershire Regiment, 2nd Battalion, Lewis Gun Section in a trench on ground captured in the taking of Brown Ridge, May-June 1918. Copyright: © IWM. Original Source: http://www.iwm.org.uk/collections/item/object/205248003