They were a fine upstanding lot of magnificent men, with exceptional esprit de corps and proud of their unofficial title…nothing could be finer than their performance and no words of praise are adequate for such men. Their epitaph lies in the text of the German Communiqué, which said: “The Leicester Brigade at Epéhy gave us the most trouble.”

The fact that the British army did not break, that Amiens, the vital rail link between Paris and the Channel ports, remained in Allied hands,  and  that so many vital yet scarce resources were squandered by the enemy, rendered Operation Michael, despite its astounding gains in territory and prisoners, a costly failure. In a few days the British Army had been driven back 40 miles across the old Somme battlefield. There the line was held however, while the Germans switched their attention to Operation Georgette, an assault on British defences south of Ypres. Some 1200 square miles of territory had been seized but at a cost in men and munitions the Germans could ill afford.

The German offensives of Spring 1918 had nearly succeeded – but ‘nearly’ is not enough and from July, they began to retreat, hoping to hold the Allies at the Hindenburg Line and perhaps negotiate an acceptable peace. The beginning of the end for Germany came on 29 September with the breaking of the Hindenburg Line by the 46th North Midland Division, including two Territorial battalions of the Leicestershire Regiment.

First, however, it was decided that a small German salient should be eliminated. The 1/5th Leicesters were to seize Forgan’s Trench and the ruined village of Pontruet, as a stepping stone to an assault on the Hindenburg Line itself, where it ran alongside and incorporated the broad St Quentin Canal in its formidably deep defences.

The Leicesters swept in from the north, as Captain J D Hills recalled:

“Odd lengths of trenches were here and there, cellars in every direction were filled with bombers and machine gun teams…’A’ Company dashed in with the bayonet. Here and there a bomb was thrown down a cellar, or a Lewis gun turned against some party which resisted, but for the most part the bayonet was the weapon of the day…”

Enemy resistance grew and the other companies ran into stiff resistance from block-houses and trenches which did not appear on British maps. Forgan’s Trench itself proved to be heavily defended, with machine guns every few yards. All three other companies of the Leicesters became tangled in bitter fighting. It was here that Lieutenant J. C. Barrett earned his Victoria Cross – as his Gazette entry on 14 December 1918 describes:

“Owing to the darkness and smoke barrage a number of men lost direction. Lieutenant Barrett found himself advancing towards Forgan’s Trench which contained numerous machine guns. Without hesitation he collected all available men and charged the nearest group of machine guns, being wounded on the way…he gained the trench and vigorously attacked the garrison, personally disposing of two machine guns and inflicting many casualties. He was again severely wounded, but nevertheless climbed out of the trench in order to fix his position and locate the enemy…despite exhaustion from wounds, [he] gave detailed orders to his men to cut their way back to the battalion.. He himself refused help and was again wounded, so seriously that he…had to be carried out. In spite of his wounds he had managed to fight on, and his spirit was magnificent throughout. It was due to his coolness and grasp of the situation that any of his party were able to get out alive.”

The stiff enemy resistance at Pontruet is a reminder that, despite the collapse of their Austro-Hungarian and Turkish allies and week after week of withdrawals and defeats, the Imperial German army was by no means broken and that the Hindenburg Line remained a fearsome obstacle. The 5th Battalion suffered losses of 11 officers and 138 men but, as their battalion history records

“We had proved that five platoons could clear a village held by three Battalions of the enemy; we had shown that when N.C.O.s become casualties, private soldiers…assume command and become leaders, and, most important of all, the battle had proved to each individual soldiers that if he went with his bayonet he was irresistible…” adding “It is a noticeable thing that there was no corner of the village which did not contain scenes of the fight: and that the dead of the 5th Leicestershire Regiment were lying with their rifles and bayonets still with them and with all wounds in front.”

The next move, despite the setback at Pontruet, was a direct assault on the Hindenburg Line. Since the evening of the 26th, the German lines around the St Quentin Canal had been subjected to one of the most punishing bombardments of the war. One thousand and forty-four field and 593 medium and heavy guns had deluged the Hindenburg Line with nearly a million high explosive, shrapnel, mustard gas and even smoke shells; destroying trenches and strongpoints, subduing counter-battery fire and isolating forward units from supply and support.

The attack was meticulously planned. The canal defences were to be stormed at bayonet-point; each battalion being assigned a coloured-coded objective. As Captain J D Hills recalled, the 1/5th Leicesters were to push on furthest; to “the ‘Green’ line, including a sunken cross-roads, an old mill on some very high ground, and a small copse called Fosse Wood….The day chosen was September 29th – the time, dawn.”

The first wave of the attack swept down upon the canal – the Midland Territorials “not stopping for anything or anyone” according to Captain Milne of the 1/4th Leicesters. Advancing swiftly behind the bombardment, both helped and hindered by fog and smoke shells, they crashed through the German lines and up to the canal. “On they went with reddened bayonets, leaving any remaining Germans to the tender mercies of the moppers-up. Down the canal bank they poured and crossed as best they could. In some places the canal was dry and the passage was easy; in others there was several feet of water, and lifebelts, life-lines, and rafts were used. Some crossed by a concrete dam, some by Ricqueval Bridge which was captured in the nick of time as the enemy were about to blow it sky high…They were well up to time and had captured their objective in two hours and thirty minutes…” 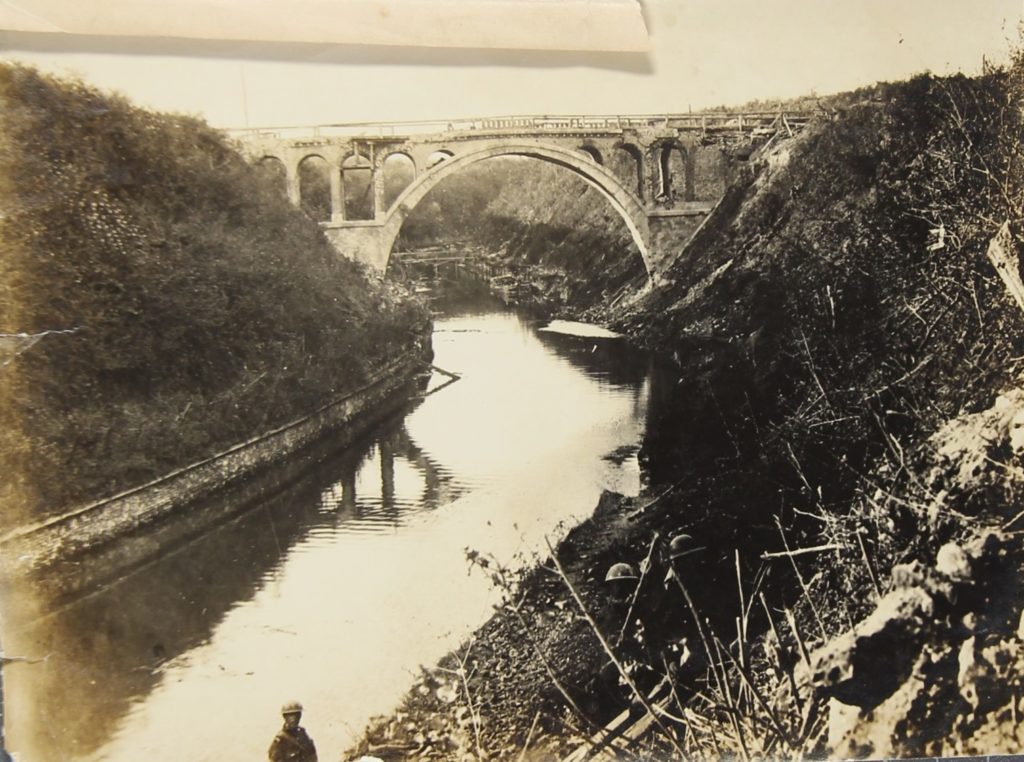 The bridge over the St Quentin canal captured almost intact

It was a miracle. Not only had the lightning assault broken the Hindenburg Line, but the Leicesters had pushed through deep into the open country behind. In a few hours some 4,200 prisoners, over 300 machine-guns and 72 artillery pieces were captured. Such victories do not come without a cost however. The division suffered about 800 casualties. While the War Diary of the 1/5th Leicesters records 4 officers killed and 8 wounded, with 31 Other Ranks dead, 114 wounded and 9 missing; that of the 1/4th Leicesters is silent. Their history simply notes that the day was ‘bloody’.