Colonel Bent’s intervention bought valuable time and the defensive line was re-established along the edge of Polygon Wood. He was awarded a posthumous Victoria Cross for his gallantry. Colonel Utterson, commanding the 8th Leicesters, was also wounded but the German assault had been driven off and a breakthrough averted.

By mid-afternoon the enemy attacks had ceased and the ‘Tigers’ desperately resumed digging-in, to escape sniping and shell-fire. Support arrived from the 6th and 7th Battalions of the Leicesters, who had themselves advanced with some loss through a devastating bombardment, and Polygon Wood remained in their hands until the ‘Tigers’ were relieved on 2 October. In two days the Tigers had lost over 700 officers and men – killed, wounded and captured. 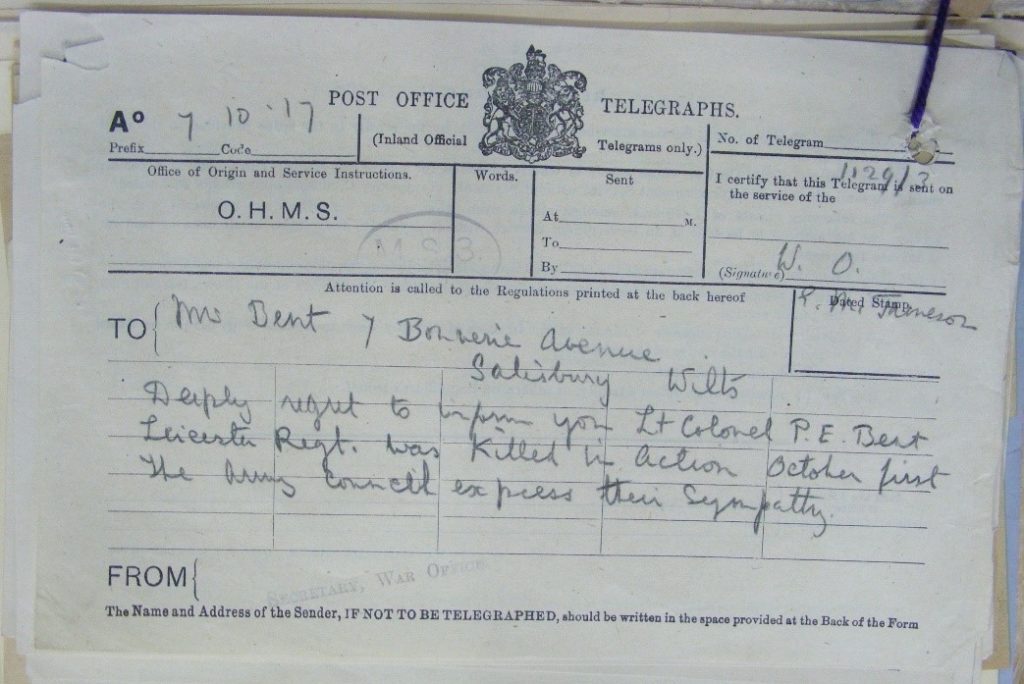 The War Office copy of the telegram sent to Colonel Bent’s mother, with news of his death.   [National Archives]

In Spring 1918 the Germans were presented with both an urgent need and an unprecedented opportunity. The need was to defeat the British and French before the arrival of fresh American troops tilted the balance of war irretrievably against them. The opportunity was peace with Russia, which suddenly released nearly fifty fresh divisions for a succession of offensives designed to smash through the Allied line and drive the British back to the Channel ports.

The first German offensive, Operation Michael, began at 4.40am on 21 March with a five hour bombardment. At 9.40 the shelling ceased and dense waves of storm troops and pioneers, concealed by thick fog, smashed through the devastated British lines. On a fifty mile front the Germans pushed deep into the British defences. A few isolated pockets of resistance remained – elsewhere companies and battalions were either cut off and surrendered or found themselves isolated and forced to withdraw.

The Leicestershire Regiment’s 1st Battalion was defending the ruined village of Lagnicourt when the Germans began an enveloping attack. Their war diary records an increasingly desperate fighting withdrawal, as successive attempts to reform a defensive line ended in enemy breakthroughs and infiltration:

O.C. C. Coy 11th Leicestershires reported he had only 37 men left & that enemy were in VAULX WOOD…

2pm B Coy reported that they had gained some ground…MARICOURT WOOD and vicinity of Battn. H.Q. were heavily shelled…

3.45pm Breach by this time was effective and the situation was becoming very grave. The withdrawal became somewhat disorderly and the enemy came rapidly through…

…a ridge…held by our machine gunners…and orderly withdrawal instituted…only 1 man (wounded, belonging to B Coy) of the Battalion, had come back from VAULX-MORCHIES Line.”

The massive German breakthrough on 21 March 1918 was a product of careful planning and good luck. Thick fog masked the advancing infantry from even the best placed machine-guns and the careful use of gas, forcing defenders to wear respirators crippled both the British infantry and artillery, as the 8th Leicesters’ War Diary recorded:

“The gas bombardment was particularly severe, mustard gas being used, all ranks were compelled to wear their box respirators for at least 3 hours. When daylight came just after 6 a.m. it was quite impossible to see the wire in front of the trenches on account of the thickness of the mist, a great disadvantage was thus experienced, the necessity for good observation being absolutely vital to the defenders.”

On the entire Front it was only at Epéhy-Peizière, where a system of strongpoints and trenches was held by the 6th, 7th and 8th Battalions of the Leicestershire Regiment, that the onslaught was halted; earning the village (and its defenders) the sobriquet “the flood breaker” from the Germans.

At Epéhy, the 7th Leicesters fought desperately to hold back wave after wave of the enemy. Second-lieutenant Wright and about 20 men held Fir Support Trench all day, against increasingly fierce Germans attacks. The battalion War Diary noted “flammenwerfers were used but these were stopped on our wire by rifle fire and the cylinders catching alight the enemy were burnt with their own weapons. Good work was done by the whole of this platoon and particularly by Pte HICKIN who on 2 or 3 occasions walked along the parapet firing a Lewis Gun from his hip at the enemy concentrating in the trenches on the flanks. Pte HICKIN was eventually killed in making one of those attacks. This platoon held out until dark when with only 6 men left it was ordered to fall back.”

The fighting continued through the night and into the second day of the offensive. Two British tanks appeared to aid the defence but eventually ran out of fuel and were destroyed by German artillery. According to Quartermaster-Sergeant D A Bacon “it was only when our men were taken in the rear, from the flank and practically surrounded, that the enemy obtained possession of the village.”

For two days, whilst all around them were driven back by an overwhelming force, the three Leicestershire battalions and associated trench mortar battery of the 110th Brigade held firm in Epéhy-Peizière.