Despite such conditions, the Tigris Corps fought a series of sharp and bloody actions; at Sheikh Sa’ad, Dujaila Redoubt and Sannaiyat. The fall of Kut brought a temporary halt to the campaign, allowing the British to reinforce and resupply – but also to reconsider the entire strategic situation in the Middle East. The renewed determination after the defeat at Kut is evident even in a simple letter home, from Private G. Brett to his father in Leicester: “I see you have heard about General Townshend’s surrender, believe me, through no fault of ours, for if ever troops did try we did, as will be seen by the honours our officers and men have received out here. It is a very difficult country to advance over…what with the marshes and the heat, and the very narrow front, it is like a man trying to get to the top of an entry with a Turkish machine gun waiting for him. I am writing this in the trenches, and we are still carrying on with the ‘snapping,’ with one or two shells going over occasionally, just to let them know that we are not beaten yet by a long way.”

In 1917, rested, and better equipped and supplied, the 2nd Battalion once again joined the offensive in Mesopotamia. This time, stronger British and Imperial forces drove back the Turks, retaking Kut and pushing on to capture Baghdad in March 1917. 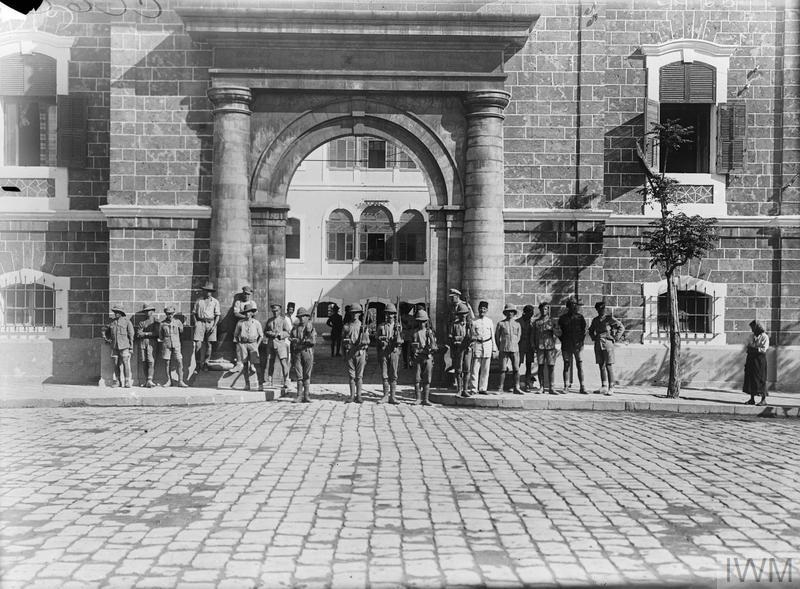 THE BRITISH ARMY IN THE SINAI AND PALESTINE CAMPAIGN, 1915-1918 (Q 12404) The first British Guard outside the municipal Buildings at Beirut. The first column of the 7th Division reached Beirut on October 8th 1918, and was made up of the 21st Corps Cavalry Regiment, No. 2 Light Armoured Battery and a Company of the 2nd Leicestershire Regiment. Copyright: © IWM. Original Source: http://www.iwm.org.uk/collections/item/object/205247905

At Beled (now Belad) the Tigers fought a brisk little action, earning considerable praise for their kill and energy, as E. J. Thompson M.C. recalled in The Leicestershire’s beyond Baghdad (1919):

“Beled Station was a small action…our casualties were little over a hundred for the whole day…The Leicestershire lost twenty, three killed among them; several of the wounded died later. But the action attained considerable fame locally as a model of a successful little battle…

…For the action itself, a small force advanced steadily throughout the day, with unreliable maps, over ten miles of broken country, which was admirably furnished with posts of defence, which posts they seized and turned into advantages for attack. They captured a strong position and over two hundred prisoners, three machine-guns, and some hundreds of rifles with less than half the casualties their numerically superior foe sustained.”

Although the advance was to continue to secure the oilfields of what is now Iraq, the Leicesters’ 2nd Battalion was transferred to Sir Edmund Allenby’s Egyptian Expeditionary Force, which was preparing to drive the Turks and their German advisors out of Palestine. In the final months of the war, the sun-helmeted Tigers, advanced steadily through the Holy Land and on up the Mediterranean coast; taking Damascus and Beirut. On 31 October 1918, five days after the Tigers marched through Tripoli, the Ottomans sued for peace.

On the Western Front, the New Year of 1917 had brought the profound shock of the German withdrawal to the Hindenburg Line. Confronted with such an obstacle, British planning shifted once again to Flanders and the Ypres Salient. A new offensive would seize the high ground around Ypres which, since 1914, had enabled the Germans to observe and shell the British defenders. It was hoped that a breakthrough would ease pressure on the beleaguered French and Italians and cut off German access to the channel ports.

The campaign, the Battle of Passchendaele (or Third Battle of Ypres) lasted from 31 July until 10 November 1917 and has become a symbol for the futility and horror of the Great War; in part due to the grim determination of the British commanders to persist in their attacks despite the horrific conditions and determined enemy resistance. British and Imperial troops ultimately drove the Germans back about five miles for a casualty list of 245,000. The German army suffered comparable losses and, in the view of Ludendorff, its Chief of Staff, never fully recovered from the constant attrition and strain of the battle. Seven battalions of the Leicestershire Regiment took part in the offensive:  Territorials of the 177th Brigade, the four Service Battalions of 110th Brigade, and the 11th Battalion – the Midland Pioneers. Their casualties alone numbered nearly 2,000 men. 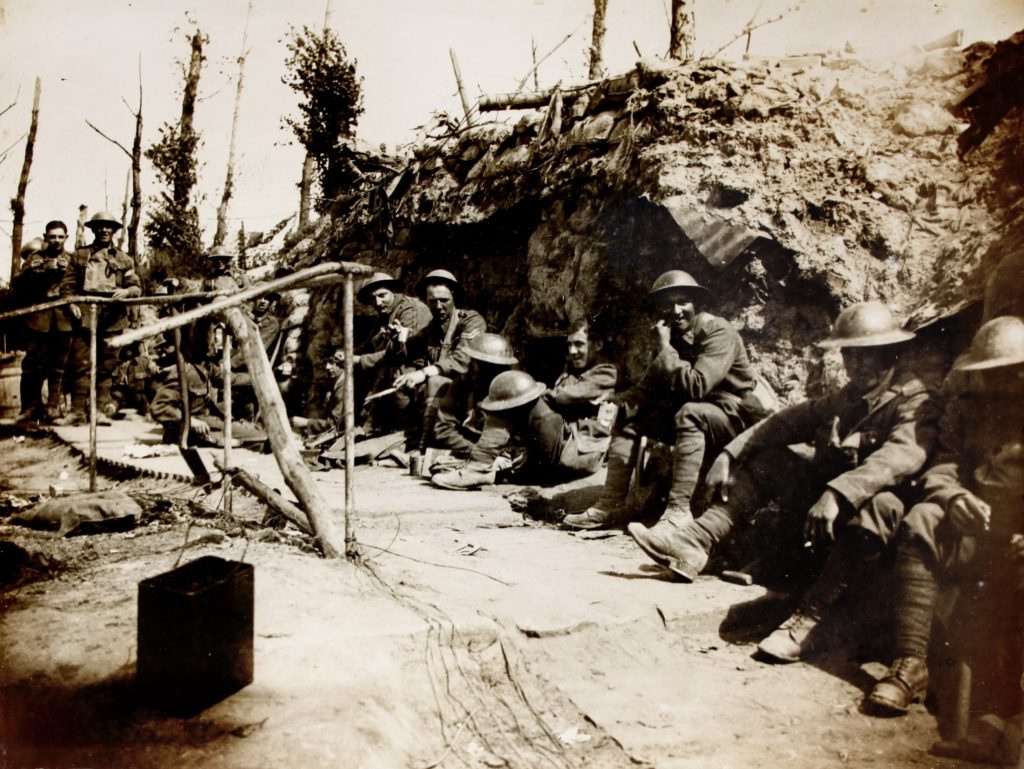 Men of the Midland Pioneers resting at Zillebeke, August 1917.

Despite a promising start, with the capture of the Pilckem Ridge, the campaign soon bogged down in appalling weather – made worse by the bombardments’ destruction of vital field drainage. By October the battlefield was an impossible quagmire, through which artillery and supplies could not pass and into which an unwary man or mule could simply slip and disappear.

After fierce fighting, at the end of September 1917, Australians of the 1st ANZAC Corps overran German defences in Polygon Wood – once woodland surrounding a Belgian Army training ground but by 1917 a desert of mud, shell-craters, and pill-box studded trenches. On 30 September the four Service Battalions of the Leicestershire Regiment moved up through Sanctuary Wood and Zillebeke, to relieve the Australians in the front-line. 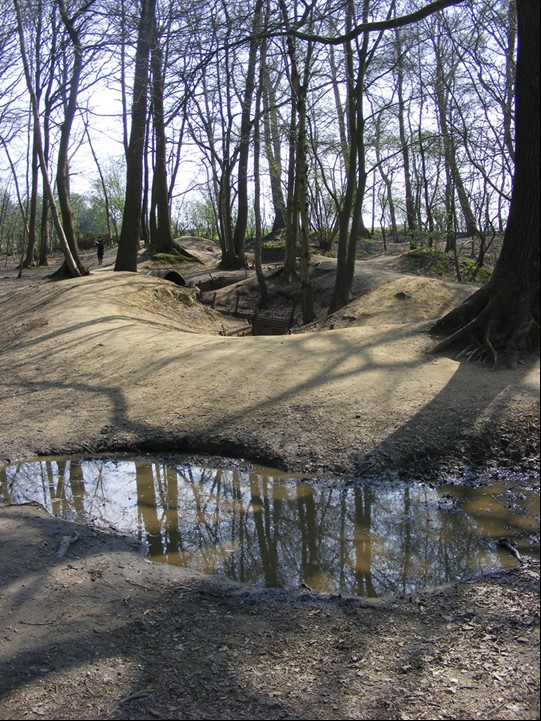 Preserved trenches in Sanctuary Wood, through which the Leicesters advanced on 30th September 1917. [RPJ]

The Leicesters had barely six hours to consolidate their line of shell-holes and concrete shelters when, at 4.40a.m. on 1st October, a heavy enemy bombardment began. At 5.25 a.m. smoke shells were added to the barrage and two minutes later wave after wave of German infantry were storming forward into the British front lines. For a few minutes it seemed as though the British front would collapse. Distress flares, calling for artillery support, were fired and a last-ditch defence was rallied by Colonel Philip Bent of the 9th Battalion. Captain D. V. Kelly was present in the headquarters:

“The Brigade, as usual stuck it out…Colonel Bent…was in a ‘pill box’ on the west side of the wood when a runner came in saying “S.O.S. gone up from (the reserve) company.” “Then we’d better get on”, said the Colonel, and went forward with his headquarter personnel. Collecting the reserve company and everyone available, the Colonel led a counter-attack, and, struck down in the moment of victory, was last seen – for his body, doubtless blown to pieces, was not found – waving his pipe and calling, “Go on, Tigers!”