However, by nightfall on 10 March the Germans, almost always masters of defence, had recovered from the shock of the assault and were pouring in reinforcements to hold their dented line. Confusion and delay amongst the attackers slowed the offensive and the 11th March was spent in bitter fighting amongst the hedges, ditches and muddy fields between Neuve Chapelle and the Bois du Biez.

On 12 March the Germans mounted a furious counter-attack, advancing in packed columns supported by an intense artillery fire. This time the British held firm and the attacking Bavarians fell in their thousands. By 13 March the frontline was stabilized; each side had suffered around thirteen thousand casualties and the Germans had been driven back 1,000 yards along a two-mile front.

To many, Neuve Chapelle was more a missed opportunity than a success; with too little attention paid to the lessons – the power of a sudden, brief bombardment and the terrible cost of poor communications and delays in reinforcement and supply. Lieut-Colonel H Gordon (commanding 2nd Leicesters) recorded a harsh verdict: “The whole country in front was open to us – no wire –no enemy in sight and certainly a big enough gap to push through a mass of men and cavalry…no one who was actually in the battle had the slightest doubt that we could have been in Lille in a few hours…”

The Regular battalions had held the line; it was now the turn of the Territorials to join the fight. The Territorial Force had been raised in 1908 as part of the reforms to create an army, with adequate reserves, sufficient both for service on the Continent and Home Defence.  They were the adventurous, likely lads who found clerical or factory work unfulfilling and fancied the comradeship and free holidays of the army’s summer camps. The new estates and suburbs of Leicester (Clarendon Park, Aylestone Park, Evington, Humberstone and even as far out as Wigston) filled the ranks of the 4th Battalion of the Leicestershire Regiment; while the county completed the 5th Battalion with hosiery hands from Hinckley, miners from Ashby and office and shop-floor men from Market Harborough.

Having spent a miserable winter waiting for uniforms and equipment and then training in the new style of warfare, the Leicestershire Territorials were amongst the first to join the B.E.F., as part of the 46th Division. In October 1915 they found themselves facing the Hohenzollern Redoubt, a bulge in the German lines left after the Battle of Loos a few weeks before. The Leicesters’ task was to storm the redoubt and iron out that bulge.

As one of the Leicesters (who saw it) wrote home: “Don’t think that the redoubt named after the German dynasty was a great fortress in the sense generally used. It was really an array of trenches dug on a ridge, and of course strongly protected by wire and machine guns.”

At 2pm on 13 October, after a whirlwind bombardment of both high explosive and gas shells, the ‘Tigers’ stormed out of their trenches and into the redoubt. The defences were in depth, including slag heaps which overlooked the frontline trenches and rows of miners’ cottages behind, which had been transformed into a veritable fortress of interconnecting cellars and ruins. The attack became a battle of bayonets and bombs (as the troops called their hand grenades). Few of the Leicesters managed to cross no-man’s land and those that did found themselves fighting for their lives in the redoubt and its surrounding trenches. 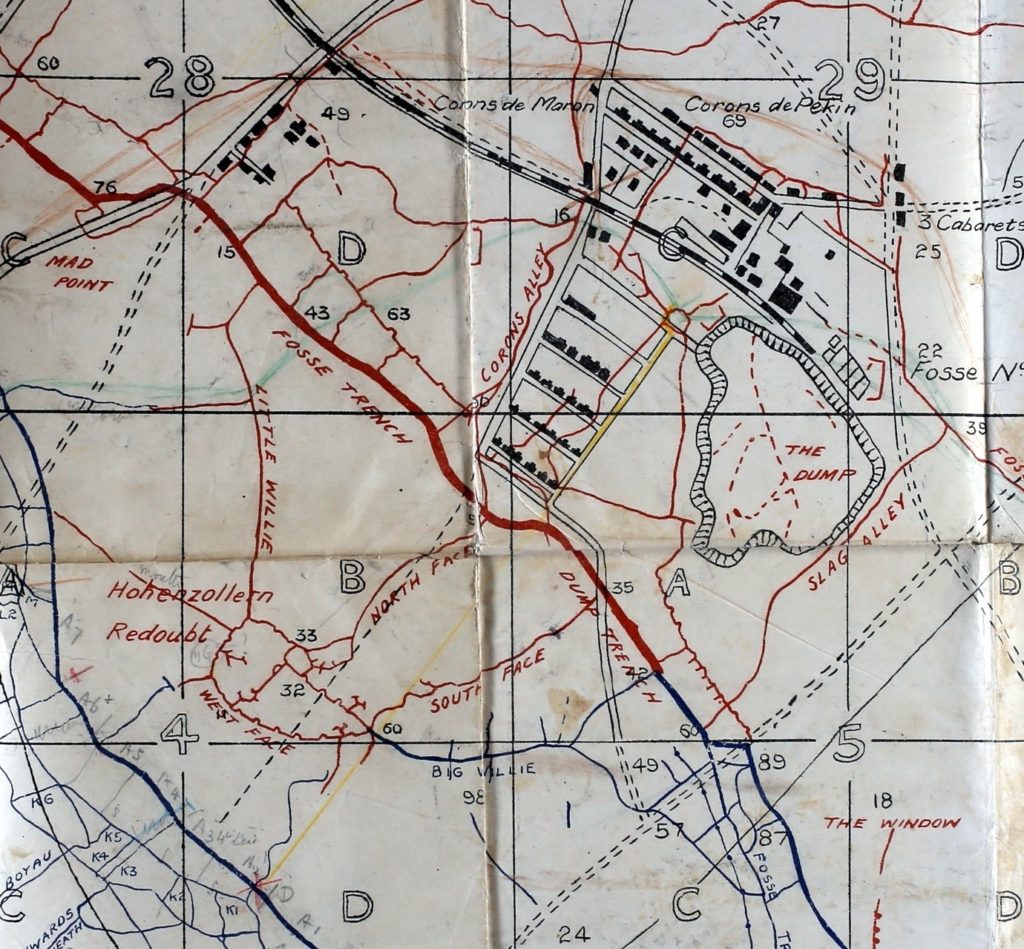 A trench map showing the ‘bulge’ of the German line (in red) and the slag heaps (‘The Dump’) and miners’ cottages (‘Corons’) behind.

Losses were horrifyingly high. Colonel Martin, leading the 1/4th Leicesters out of their trench was hit almost immediately but refused to leave the sandbag parapet; insisting upon remaining despite his wound, to direct reinforcements and supplies forward. One of his men recalled the hail of German rifle, machine-gun and shell fire:

“The parapet was swept by machine guns as we started…We were simply mowed down by rifle and machine gun fire…The men on the left were a little better off, as a rise in the ground shielded them a little from the machine guns…The men were simply magnificent. They went over the parapet as one man. Not one hesitated a moment, when men were falling all around.”

By 5 o’clock barely an officer of the 1/4th Battalion remained unhurt and increasingly desperate messages were arriving from the Redoubt appealing for bombs and officers. The Leicestershire Territorials were holding grimly on in the front lines of the Hohenzollern Redoubt; its second and third lines untenable by either side. As Captain John Milne recorded in his history of the 1/4th Battalion: “The attack has been carried out with the greatest dash, courage and precision, but the odds are too great, the machine-gun fire from Fosse 8 has been devastating. No man’s land is a shambles.”

With casualties in the 46th Division nearing 4,000 officers and men, there was little hope of doing more than holding onto the nearest edge of the Redoubt – and this required reinforcements and fresh supplies of bombs and ammunition which were slow in arriving across open ground, still swept by enemy machine-guns and bombardment with high explosive and gas shells.

The news of the attack fell upon Leicester like a thunder clap. The Territorial Forces Association offices were besieged, newspapers sold out on the street corners and hardly a street of town or county did not dread the arrival of the telegram boy. Only 188 men of the 1/4th Battalion answered the roll that night, representing losses in the 1/4th Leicesters of 20 officers and 453 Other Ranks. Even in support, the 1/5th Battalion lost 12 officers and 175 men.

For the Official Historian of the Great War, Sir James Edmonds, writing in the 1920s, the assault on the Redoubt “brought nothing but useless slaughter of infantry” and the near ruin of a promising division. The human cost was certainly great and there is no shortage of poignant testimony. Captain Milne’s account of the attack concludes with a description of his battalion’s withdrawal to billets behind the lines on 15th October. Every officer of the battalion was killed, wounded or missing, save for the two whose duties kept them from the front line. Milne wrote: “The quartermaster and the transport officer mess together alone, but they dare not look at each other.”

The tragedy of the attack on the Hohenzollern Redoubt, its losses and its gallantry, is still remembered and honoured by the Regiment every year on 13 October.

Sadly, the second line units of Leicestershire’s Territorials, the 2/4th and 2/5th Battalions of the 177th Brigade, were to see action rather nearer home than anticipated. On 25 April 1916, their brigade was rushed from training for the Western Front in Harpenden, to the harsher reality of bitter street fighting in Dublin. A bewildered ‘Tiger’ recalled the confusion and savagery of civil conflict: